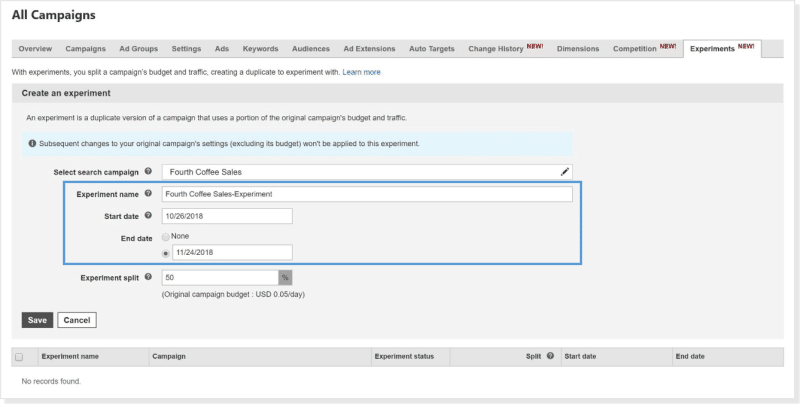 Testing different variations of an ad campaign is an essential part of a successful PPC strategy. It can be surprising how much impact a slight change in wording can have on the effectiveness of a particular ad. Companies that use Microsoft Advertising will soon find it easier to test variations with updated A/B testing features.

“Sometimes, it’s not immediately clear whether a new bidding strategy, setting, or feature is the best move for you,” wrote Microsoft’s Subha Hari and Piyush Naik in an announcement. How can you make sure that you’re making the right decisions for your Microsoft Advertising campaigns without wasting precious time and resources? With experiments rolling out globally, you can now test out those campaign changes with full confidence.”

Microsoft’s new Experiments feature is a way for businesses to run A/B tests for their campaigns without launching the test for the entire campaign. Advertisers can use the results of the Experiments to determine which variations are worth including into the main campaign.

There are many ways to use the new feature, and Microsoft Advertising discussed a few of the methods that advertiser should try first. You can experiment with the ad copy to test elements such as a different message or call-to-action for the ads. Advertisers can also check the effectiveness of different landing pages to see if it results in better conversion rates for the campaign.

The Experiments feature will also allow advertisers to test the behind-the-scene elements that determine how ads perform on Microsoft Advertising. Test various bidding strategies and modifiers to see if a different method of ad delivery affects the performance of the campaign. You can “allocate a percentage of your campaign budget towards a smart bidding tactic like Maximize Clicks, or test out different bid adjustments.”

Companies that got to work with Experiments during the beta period found the new features to be advantageous. Brian Hogue, the Media Director at Performics, wrote, “Experiments allowed us to set up, execute and implement results from an automated bid strategy test with ease. We look forward to leveraging this new capability across upcoming tests.”

In the blog post announcing the new features, Microsoft gave some advice on the best way to use the feature to improve ad performance. For example, instead of immediately starting with the A/B test, Microsoft recommends doing two weeks of A/A testing first. By running the experiment campaign the same way the main campaign is run, the system better reflects actual ad performance. As Hari and Naik explained, “This will allow time for the experiment campaign to ramp up and help validate that it’s running the same as the original, so that you can run a true A/B test.”

Once you used the A/A testing to establish a baseline, run the experiment for two weeks with the modified parameters. Running A/B tests in this manner may take a little longer, but the results will better reflect what will work on the actual campaign.

Companies that include Microsoft Advertising in their campaigns should use the Experiments feature to find new ways to better connect with a target audience. The latest edition is part of a host of changes that have come to the platform this year.

For more news about Microsoft Advertising, read this article on the new Ad Customizer that makes variations easier to create.