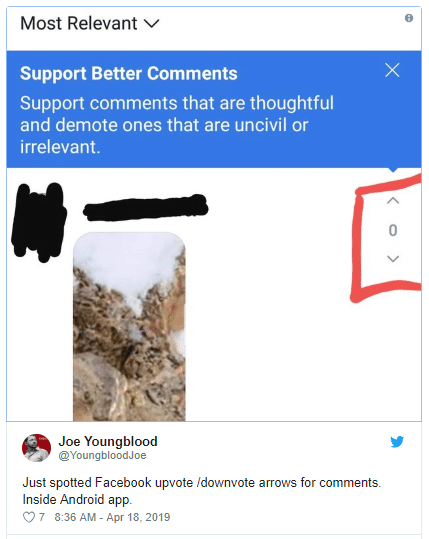 One of the most significant issues facing online platforms is the continued rise of inappropriate and toxic comments. The problem has gotten so bad that many people don’t read the comments on website posts or content on social media. Even if there are good, worthwhile comments in the mix, people don’t want to wade through dozens of offensive remarks. Facebook is testing an upvote and downvote feature for comments that could make the experience more pleasant for readers.

There’s an old saying that goes, “If you can’t beat ‘em, join ‘em.” While one could argue that Facebook is beating Reddit, Facebook has decided to test out trying a page from the Reddit playbook. By letting users vote comments and articles up or down, Reddit makes it easier to find the best content or at least the most popular content. Adding up and down voting for Facebook comments could have a similar effect.

Though Facebook has yet to make an official comment, the testing has been seen in the wild by social media marketers. On posts that have the testing feature enabled, Facebook writes, “Support comments that are thoughtful and demote ones that are uncivil or irrelevant.”

As a quick look through Reddit will show, upvoting isn’t a panacea for toxic behavior online. With voting open to everyone on the platform, Reddit’s system can be manipulated by a group of people with an agenda to inflate the number of upvotes or downvotes content receives. For any hot-button issue, you can expect activists from both sides to try and hijack the voting system. This problem will be muted on Facebook since people can limit who sees their content, though Business Pages will have to deal with this issue.

Companies that use Facebook already have issues with the way the algorithm chooses comments and reviews. Even if there are multiple positive reviews to show, Facebook will sometimes continue to show the outlier negative review prominently (presumably in the name of balance).

Something similar can happen if upvoting/downvoting come to Facebook officially. For example, say a clothing manufacturer posts an image of a new shirt they’re selling. If a negative comment gets upvoted, it would be the first thing that someone sees when they look at the comments under the post.

Obviously, Facebook will do a lot of fine-tuning during the testing process to see how they can get the benefits of a voting system for comments without inviting the negative aspects. If the system works as intended, it could lead to better discussion in the comments section, and allow visitors to read the best comments without wading through toxic and negative responses.

For more recent news about social media marketing that can affect local businesses, read this article on SEO suggestions to improve a business’s LinkedIn Company Page.