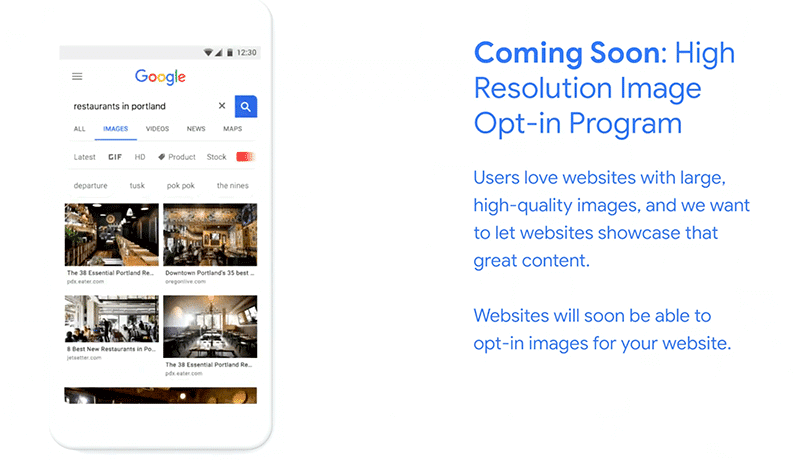 Imagery is a huge part of the internet. The love for visual art is why cat photos dominated the early internet, why Instagram remains so popular, and why people search for infographics instead of written content about a particular data set. The desire to search for images makes Google Image Search a valuable tool for consumers and a method for marketers to reach their target audience. At a recent conference, Google announced some upcoming updates for Google Image Search.

Google held the Google I/O event last week, and as is a tradition for these events, the company previewed some new features that would become available over the year. There were several promising programs previewed, and one involved Google Image Search. During the State of Search session at Google I/O, the company announced a new program where users can submit higher resolution images to Google Image search is coming soon.

As screens become more powerful and with sharper resolutions, it’s essential for content creators and producers to have access to higher quality images. If you plan on displaying an image on a 4K screen, you need an image that’s large enough to look good at full screen without being pixelated.

Since you know that people will be searching for these pictures, including going to a site that some to find more, using this feature can be a viable part of an SEO campaign. For example, if you make an infographic for your brand, submitting one at the largest size will increase the odds of someone finding the graphic, and your website, through Google Image Search.

Another update will allow for 3D images in Google search. Earlier in the conference, Google demonstrated an augmented reality feature that uses 3D objects into the search results. The feature is already in beta testing in India. According to people who attended the event, “Google said you can place, view and interact with 3D objects right in your own space.”

AR has a lot of potential for retail marketers. You can create images that work in AR so people can get an idea of how something would look when set up in a location. Google showed several examples of the product in action. You could see someone take a fun photo with shark image or place an object in their home and office to see how it looks.

Google also announced some updates related to imagery in AMP stories. It will be possible to swipe up from an image you found in search, and that action will bring up an AMP article associated with the image. This feature has the potential to make it easier to bring in traffic from your pictures that appear on Google Image search.

Though these changes haven’t received official release dates, there’s little doubt that they will be available soon. Marketers can get a head start by creating more higher-quality images that they can use to promote their brand and industry. Similarly, now is the time to start working on 3D images of products that customers may want to use with AR.

Google’s announcement promises many ways for brands to increase their exposure and web traffic by utilizing Google Image Search. For more recent news about changes and updates to Google, read this article on the new CallJoy virtual agent from Google.