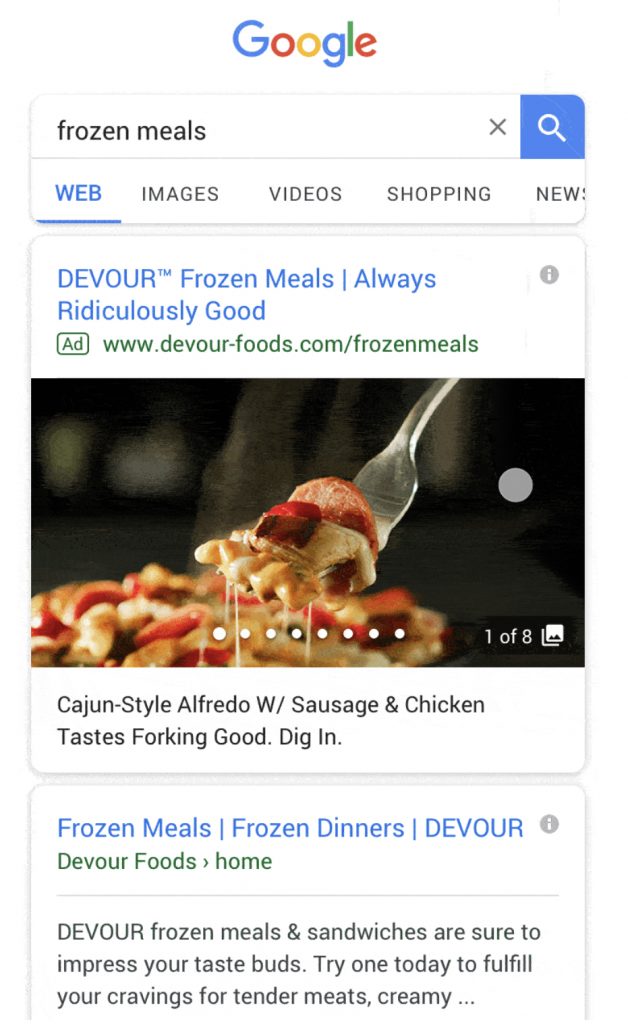 Imagery is an integral part of any advertising campaign. The right photo can help consumers see the value in an offer, and pictures could be the factor that gets searchers to click on an offer to learn more. After being in unofficial tests for months, Google is ready to begin beta testing on gallery ads officially.

The basic idea behind Gallery ads is simple. Instead of using a single image on an advertisement, businesses can give their target audience several images to look at in a single ad. Advertisers can make a stronger impact with this format. Rather than choose one image for each ad, advertisers can create a gallery that gives the viewer a reason to engage with the ad, and more opportunities to get the person to click.

The sample Gallery ad used for demonstrations shows an advertisement for Devour, a frozen food producer. The gallery features eight images with different photos of food that Devour sells. Each has its own photo caption. In the sample ad, the caption lists the name of the item shown in the picture.

As Google’s Senthil Hariramasamy explained in a post announcing the test, “Gallery ads are a swipeable, image-based ad format that gives customers the information they need about your products and services—right at the top of the search results page. You can showcase your brand with lifestyle imagery and bring visual content forward to the results page, helping you connect with consumers before they visit your site.”

Gallery ads were first shown to audiences in May during the Google Marketing Live 2019 event. Google said the feature would become available later this year, but it took a while before anything else was known about this new advertising product. Gallery ads have the potential to be a game-changer for PPC ads. It makes sense that the company spent more time testing these ads before giving the public access to these tests.

Four months have passed since Gallery ads were first teased to advertisers. It’s taken longer than expected to see these ads enter the beta testing phase. However, Google is making up for the lost time by testing the ads in multiple markets at once. Usually, Google tests products in the U.S. first, and then they roll out the feature to global markets. With Gallery ads, the beta test includes many locations around the world at once.

The beta tests for Gallery ads are currently available in 11 languages, and more are on the way. So far, global advertisers can run Gallery ads in English, German, Japanese, French, Spanish, Dutch, Portuguese, Italian, Russian, Swedish, and Polish. Google also says they are expanding the beta to more customers. They’ve also set up a link that advertisers can use to see if their accounts are eligible to be a part of the beta test.

For more recent news about updates and changes to PPC advertising platforms, read this article about the Microsoft Ads recent change that will make campaign-level associations possible.